All Dancers from College Sports Clubs, Dancing Schools or other Dancing groups are permitted to take part in this tournament, if the following terms are met.

The registration is open.

The 16th Mainzer Fastnachtsturnier takes place on 23 February 2019. The registration opens on 11 November at 11:11 am. 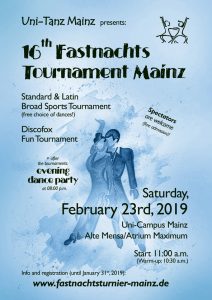